“We reject the resolution on external activities of our country”

“We are working to recover from the post-conflict situation”

“Amid COVID -19 challengers, we fulfill our responsibilities”

She called on the member states of the International Human Rights Council to pay close attention to the progress made on the resolution on reconciliation and the promotion of Human Rights in Sri Lanka, adopted at the 46th Session of the UN General Assembly.

Ms. Bachelet also stated that in the past she had focused on the use of force and the detention of detainees and their detention in quarantine centers during several peaceful protests and celebrations in Sri Lanka.

Foreign Minister, Professor GL Peiris addressing the 48th Session of the United Nations Human Rights Council yesterday (14) responded to the concerns, raised by Ms. Bachelet at the Session while further emphasizing the stance of Sri Lanka over these concerns.

At the beginning of his explanation, Foreign Minister Professor G.L Peiris stated the Sri Lankan government is rejecting the resolution on external activities, established by Resolution 46/1.

Stressing that the local issues would be addressed through various processes, including Human Rights, he further stated

I begin by emphasizing our strong and continued cooperation with this Council and the Human Rights system, mandated by the United Nations in accordance with our Constitution and the international obligations, we have voluntarily accepted.

Sri Lankan government eradicated LTTE terrorism Twelve years ago from our territory. We have restored peace, security and stability for the benefit of our people. We have strongly maintained our democratic traditions while holding elections with a high level of voter turnout at regular intervals, including the recent 2019 Presidential election and the 2020 General election. The government is also committed to hold the Provincial Council elections as soon as possible.

We are working to recover from the post-conflict situation from the point of view of coming back to normal. Most recently, 16 LTTE members, convicted of serious terrorist crimes, were granted a presidential pardon. We have made the maximum contribution for the national reconciliation through successful post-conflict demining, rehabilitation and resettlement programs

Allow me to highlight the local progress made by the Sri Lankan government in the face of daily challenges of the devastating COVID-19 pandemic.

The Office on Missing Persons (OMP), as its primary function, is finalizing the list of missing persons in collaboration with other institutes.

·         The Office for National Unity and Reconciliation (ONUR) continues the implementation of  its 8 point Action Plan.

·         The Steering Committee on 16 Sustainable Development Goals is working to promote peace, justice and strong institutions.

We maintain a strong relationship with civil society in order to gain an understanding of their vision and to utilize their support to achieve reconciliation and development.

Following due process of law in all respects, the Sri Lankan government continues to investigate and prosecute the perpetrators of the horrific terrorist attacks that took place on Easter Sunday, 2019.

As usual, we are vigilant in the battle against terrorism and in protecting Sri Lankans of all faiths.

While working strongly on relevant issues through domestic processes, we reject the resolution, said to be established under 46/1 for external action. As we have experienced with resolution 30/1, this will polarize our society. This Commission should adhere to its founding principles. External initiatives, initiated without the support of the respective country will not be able to achieve their stated goals which will be subjected to politicization.

When these are existing for humanitarian and other positive purposes in many territories of the world, spending resources on these initiatives is an unnecessary task.

Under the severe challenges of the current COVID-19 pandemic, we consider ensuring the supply of essential commodities for the public as a key responsibility of the government.

We are committed to making tangible progress in the areas of accountability, reconciliation, human rights, peace and sustainable development while acknowledging our challenges.

Dear Madam, we are thankful to you 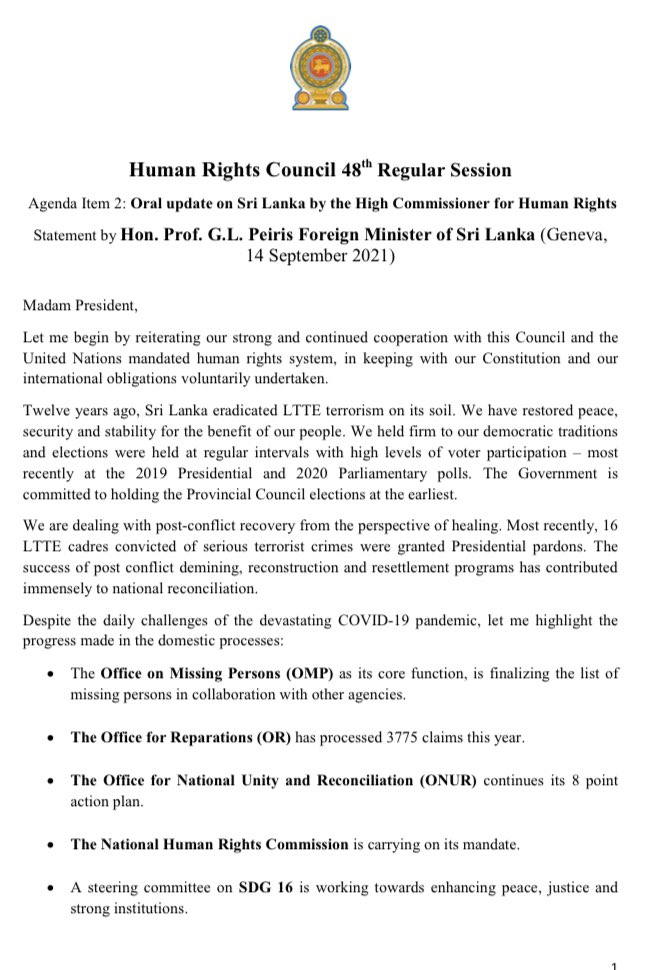 Government service is only for cronies

The future of the world depends on national