The Symbol of Genuine politics

Ranil’s passivity following his accession to the leadership of the UNP was not initially upsetting to the party. But after he lost the Presidency to Chandrika Kumaratunga in the early Election she called in 1999, and then the Parliamentary Election the following year, rumblings began. These crystallised round Karu Jayasuriya who had been a remarkably successful Mayor of Colombo after he was elected to the position in 1997.

He was taken out of Municipal politics in 1999 to lead the UNP campaign for the Western Provincial Council Election. Though the UNP lost, Karu’s reputation was enhanced since the party did well and also because he refused to put up posters. His reasons, that these promoted both violence and pollution, were self evident but had never previously been expressed publicly.

So after the General Election of 2000, when he did very well in the Gampaha District, he was the natural choice to be Deputy Leader. And then the party Secretary, Gamini Athukorale, who had been handpicked for the position by Ranil but become increasingly disillusioned, tried to promote a change.

He worked with Karu and they got the backing of many members of Parliament but then Anura Bandaranaike, who had joined the UNP when his sister gained ascendancy in the SLFP, called up Ranil who was in Norway and told him he had better come back quickly if he was to hang onto his position. Though foreign travel, funded at high costs generally by the party, had been Ranil’s principal occupation, he took the warning seriously and rushed back and compromise was reached. Though Ranil’s confidantes claimed that Athukorale and Jayasuriya could not be trusted, the latter said latter that his principal aim had been to galvanise Ranil into action.

In this he seemed to have succeeded for throughout 2001 there were intensive discussions with Government parliamentarians to engineer crossovers, a practice Ranil was familiar with given what Esmond Wickremesinghe had done in 1984 to bring down Sirimavo’s Government. Esmond would claim that money had changed hands then, and this happened now too, though Ranil himself steered clear of such dealings. Indeed his sister Kshanika claimed that he had been told to stay out of things, while more persuasive characters such as his elder brother Shan got involved, the latter according to Kshanika meeting possible defectors at night in secretive locations.

But that Ranil was involved seems clear from the claim of Nahil Wijesuriya, put to the Bribery Commission later, that he had as requested by Ravi Karunanayake given Ranil Wickremesinghe Rs 60 million in the form of two cheques. Ravi had told him he should hand them direct, which he then did, at Ranil’s 5th Lane Residence. That these were intended for bribery is probable though obviously nothing was made clear about this to Nahil.

By then the business community was keen to support the UNP for Chandrika was leading the country into a disastrous situation. She had perhaps been thrown off balance by the bomb that had injured her at the 1999 Presidential Election, and her behaviour had become increasingly erratic, alienating former devoted supporters such as both her Deputy Finance Ministers, S B Dissanayake and G L Peiris. And the attack by the LTTE on the Katunayake airport in July put paid to the idea that the Government was coping adequately with the terrorist threat, while it created havoc for the economy.

Agreement with the JVP

Chandrika tried to shore up her Government in the face of increasing disaffection through an agreement with the JVP, but soon after that was signed there was a mass defection to the UNP. Instead of working towards a compromise she called an Election in which the UNP did much better than Chandrika’s People’s Alliance and the JVP together. And so Ranil became Prime Minister for the second time.

But he did not have a majority on his own, and needed the support not only of the Muslim Congress, which had of course allied with him at the Election, but also the Tamil National Alliance. But they were not entirely on his side, since they were in thrall now to the LTTE which had decided Ranil was a far better bet than Chandrika for them to get what they wanted.

In fact the TNA and the UNP had come together the previous year to scuttle Chandrika’s attempt to resolve the national question through constitutional amendments that she had worked out with the help of Neelan Tiruchelvam. But the LTTE, accusing him of obsequiousness to her, had assassinated him in 1999 and after that the TNA, through terror perhaps, folded up as an independent entity. So they rejected the package Chandrika put forward in 2000 on the grounds that it did not offer the Tamils enough, while UNP parliamentarians burnt the text on the floor of the house, claiming that it was in effect a sell out to the Tamils.

Ranil had watched this calmly and said nothing. Though it was argued that his opposition to the package was because Chandrika had reneged on her commitment to abolish the Executive Presidency (in fact provision for this was made, but to take place only after her current term), the impression created was that the UNP was against even the limited greater empowerment of Tamils that the package envisaged.

But from what followed it became clear that the Tigers had no doubt they would get more from Ranil. After he won the Election he signed a Cease Fire Agreement with them that gave them a great deal of leeway, including the opportunity to expand operations in areas previously under army control. And Ranil and his complacent Minister of Defence, Wijetunge’s former Attorney General Tilak Marapana whom Ranil had brought into politics, turned a blind eye to all this. So the Tigers had a field day, including bringing in weapons on ships that Marapana tried to stop the navy searching, as permitted under the CFA. When, supported by Chandrika, the navy insisted and Norwegian Cease Fire Monitors boarded the ship, when they got close to the hidden weapons, they were told to leap off the ship which was then blown up along with its crew.

When Ranil won the Election it had been assumed that the Deputy and Assistant Leaders of the Party, Jayasuriya and Athukorale, would be given senior positions, probably Finance and Defence respectively, but they were sidelined with unimportant portfolios. The reason for this was expressed graphically by Ilika Karunaratne, a former acolyte of Lalith Athulathmudali.
She asserted that the duo could not be trusted, and cited in particular  Jayasuriya’s claim that he had dreamed that one of the Senanayakes had appeared to ask him to save the country. Jayasuriya, who had reported this dream to Wickremesinghe, interpreted it as a call to action, not necessarily for his leadership. But to a superstitious clan it seemed obvious that Jayasuriya could not be relied on.

But Jayasuriya was a gentle sort and did nothing to control Wickremesinghe’s excessive indulgence to the Tigers. Athukorale might have been less easy to control, but within a month of the Election he was dead. He had driven home after a party on New Year’s Eve, and gone to bed, and never woke up. He was not yet 50 but, since he had a mild heart condition, and given the stress of the preceding period, foul play was not suspected at the time. But even at that time there were suggestions of foul play, with suspicions being cast on Ranil too.

The most extreme allegations were made by Mangala Samaraweera, who asked for a commission on the death when in 2005 he was in charge of Mahinda Rajapaksa’s campaign for the presidency against Ranil. Nevertheless the suggestions that he himself had a hand in this seem absurd, on par with the suggestions that tied Premadasa to the deaths of potential rivals in the UNP. But on hindsight it is not inconceivable that the Tigers, whose reach was considerable, saw in him the one obstacle to achieving whatever they wanted through the UNP.

Meanwhile the handpicked favourites whom Wickremesinghe had picked to head the vital Ministries mentioned above did much to contribute to a general impression of both incompetence and sleaze. They were both from the National List, with no political experience or strength of their own, which suggests that whatever they did was with the Prime Minister’s blessing. Between them they made clear that the excuse proferred by some of Wickremesinghe’s more honest supporters, that he could not afford to alienate corrupt politicians who brought him votes, was untenable.

Both his Minister of Defence, Tilak Marapana, and his Minister of Finance, Nariman Choksy, who had been prominent during D B Wijetunge’s Presidency, figured large in the criticism of a newspaper editor who had been one of Wickremesinghe’s devoted followers during the Jayewardene regime. In claiming that there were only three senior Ministers who were untainted by fairly credible allegations of corruption, he specifically included Choksy, a senior lawyer who seemed to have no need of more money, asserting though that it was his wife who was primarily responsible. Officially however it was Choksy who made plain the commitment of his party to its sources of funding when he introduced an amnesty for tax evaders that was in effect a charter for cheats. 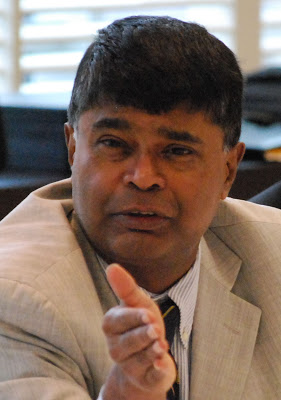 The Absence of leaders-A crisis