MCC - SL can choose to accept or not – Mike Pompeo

US Secretary of State, Mike Pompeo ended his visit and said he was able to hold productive talks with President Gotabaya Rajapaksa on “post-pandemic economic recovery and development and the importance of our partnership to bolster sustainable and transparent trade and investment that benefits the people of Sri Lanka”.

Secretary Pompeo accompanied by his wife Susan Pompeo and a high-level delegation arrived in Sri Lanka on Tuesday (27) less than a week ahead of the US’s November 3 Presidential Elections and marking the eve of the 72nd anniversary of the establishment of diplomatic relations between the two countries. The delegation comprised US Ambassador to Sri Lanka, Alaina Teplitz, Under Secretary of State Brian Bulatao, Chief Assistant Deputy Secretary at the Bureau of South and Central Asian Affairs, Dean Thompson and Senior Advisor to the State Secretary Mary Kissel.

Pompeo was on a South and Southeast Asia tour in a bid to ascertain free and open Indo-Pacific strategy, and ensuring that the Indian Ocean remains a “zone of peace”.

During his meeting with President Rajapaksa at the Presidential Secretariat on Wednesday, Secretary Pompeo expressed the US’s desire to continue to work closely with Sri Lanka to achieve a “high level” of economic development. He also said that priority will be given to promote US investments in Sri Lanka.

President Rajapaksa said that it was essential for Sri Lanka to achieve a high level of economic growth by attracting more foreign investments. He said the focus was on not to continuously take loans.

“We have already begun to remove bureaucratic red tape that hinder foreign investment. Sri Lanka is a country that has necessary factors to achieve a high agricultural development. Our agriculture sector should be modernised. Scientific research should be conducted to reach this goal. We expect your assistance towards this end”, he said. The that the country would stay neutral in its in its foreign policy.

The President also said he was not ready to compromise the independence, sovereignty and territorial integrity of the nation in maintaining foreign relations whatever the circumstances may be. He said that China assisted in the development of the country’s infrastructure since the end of the battle against terrorism and that Sri Lanka was not caught in a debt trap as a result.

During the discussion, Secretary Pompeo also said that “great American companies” are already in Sri Lanka. “These American companies are the most reliable partners on the planet. They’re accountable to the law, they’re transparent, they’re assets to the communities in which they operate,” he later said during a press briefing the same day.

He said that tourism is a key sector that contributes to employment and income generation, and that the US is ready to give a helping hand to the development of this area under a carefully prepared action plan. 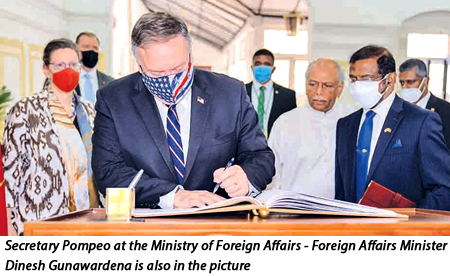 Upon completion of his discussions with President Rajapaksa, Secretary Pompeo met Foreign Minister Dinesh Gunawardena at the Foreign Ministry where they agreed to convene the annual Partnership Dialogue at an early, mutually convenient time frame, taking into account the existing Covid-19 pandemic situation, and to take steps to progress on several economic and development related initiatives, in addition to invigorating the Trade and Investment Framework Agreement (TIFA) and the US GSP facility.

“The United States is one of Sri Lanka’s major development partners with over U.S. dollars two billion worth of development assistance in wide-ranging areas including agriculture, environment, natural resources, health, education, research development, trade, and humanitarian assistance,” Minister Gunawardena said adding, “The U.S. remains Sri Lanka’s largest single market with exports of U.S. dollar, 3.1 billion in 2019, and even in the present context of Covid-19, related market downturn remains in a smaller position with U.S. dollars 1.1 billion for the first half of this year”.

The Sri Lanka- China relationship was also a key topic of the discussions.

Shortly before Pompeo’s visit the Chinese Embassy in Colombo issued a statement reacting to what Chief Assistant Deputy Secretary, Bureau of South and Central Asian Affairs, Dean Thompson said during a teleconference.

He said that the US urges Sri Lanka to make ‘difficult but necessary decisions to secure its economic independence for long-term prosperity, and that we stand ready to partner with Sri Lanka for its economic development and growth’.

The Chinese Embassy replied saying, “We are firmly opposed to the United States taking the opportunity of the State Secretary’s visit to sow and interfere in China-Sri Lanka relations, and to coerce and bully Sri Lanka.”

Replying to a question raised by a journalist regarding the relationship with China, Minister Gunawardena said Sri Lanka is a neutral, non-aligned country committed to peace, and they hope to continue relations with the United States and other countries.

The controversial MCC Agreement was a main focus in the bilateral discussions. Secretary Pompeo said that Sri Lanka can choose to not accept the deal if it does not make sense for the country.

“The relationships, the strengths, the depths, and complexity of our relationship far exceed any one transaction and one opportunity.

There will be plenty. We will work closely on them alongside the Sri Lankan government,” he said during a media discussion. 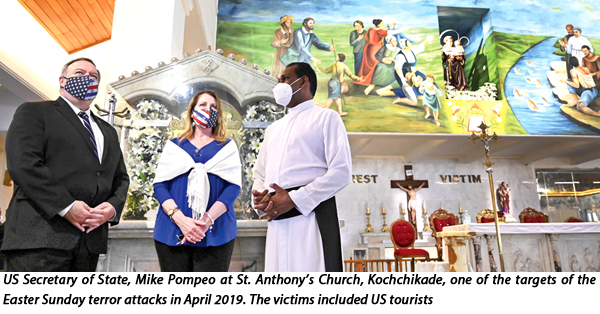 He ended the visit to Sri Lanka by visiting St. Anthony’s church, Kochchikade where he and his wife Susan Pompeo, laid a wreath in remembrance of those who died in the April 2019 Easter Sunday terrorist attacks.

Before this visit he said, it was important for him to visit the Shrine where many people including five Americans lost their lives during the bombing.

“I’m proud that the State Department has offered substantial counter terrorism assistance to help Sri Lankans bring killers of Americans and their own people to justice.

These Easter Sunday attacks represent the kind of sectarianism that Sri Lankans are ready to leave behind forever. Sri Lankans of all backgrounds – Buddhists, Hindus, Christians and Muslims alike – want a peaceful nation where their human rights are respected,” he said.

The delegation then left the Maldives, their third stop on a four-nation tour.