Salaries of Government Employees under threat

Do not experiment with the constitution

Will Sri Lanka face a situation similar to America

Is it possible to continue government services after June 2, 2020

Contradictory position of Treasury and government

Given the current state of affairs in our country, I think it is timely to discuss whether there will be a breakdown in public services in the near future. At this juncture, it is expected that there will be a shutdown of some of the government services from the 5th of June 2020, if the parliament is not reconvened.

I would like to discuss the above notion of a possible government shutdown, by drawing attention to the experience of other countries such the United States. In the United States, a government shutdown occurs when Congress fails to provide the government with the funding for its next fiscal year. In such a situation, non-essential public servants are granted leave without pay due to inadequate funding.  It usually takes some time for Congress to pass a budget. During this period, the government has to work through existing reserves.

In discussing the situation in our country, His Excellency the President dissolved Parliament with the publication of a Special Gazette Notification on March 2, 2020 (No: 2165/8-2020). The Pre-Election Budget Position Report 2020 issued in March 2020 (Visit Treasury Web, http://www.treasury.gov.lk/ under other publications) and the Article 150/03 of the Constitution specifies that the validity period for expenditure from the consolidated fund is for the next three months, commencing from 6 March 2020 to 5 June 2020. Therein, a total provision for government expenditure as Rs. 1229 billion, 715 billion of recurrent expenditure and Rs. 150 billion of capital expenditure has been provided. The amount allocated for repayment of loans is Rs.360 billion. The total amount of expenditure for the period under review is Rs. 420 billion. Below is page 12, an excerpt from the Pre-Election Budgetary Position Report 2020.

The Secretary to the Ministry of Finance has issued the circular, BD/CBP/01/01/04,  to all Secretaries of Ministries, Chief Secretaries of Provincial Councils and Heads of Departments (part of the Sinhala letter is given below) authorizing the utilization of money for the period of March 2020 to the end of May 2020 from the Consolidated Fund as per the provisions in Section 03 of the Article 150 of the Constitution. 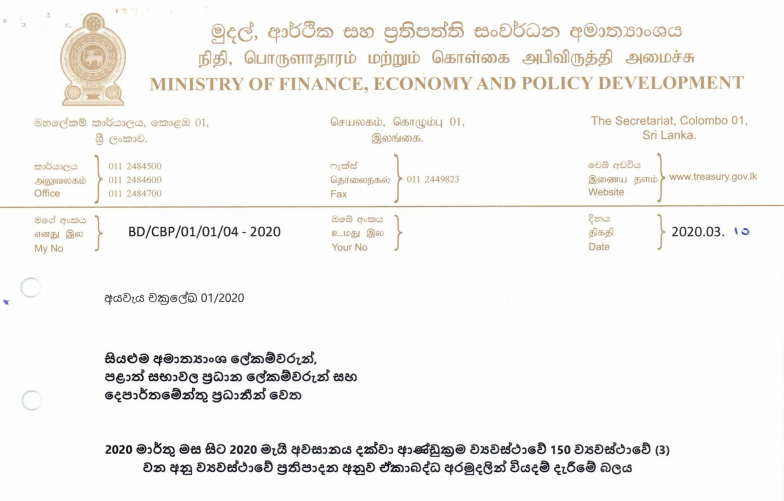 The Pre Budgetary Report by the Secretary to the Ministry of Finance categorically states that there is a provision under Section 3 of Article 150 of the Constitution of the Democratic Socialist Republic of Sri Lanka to provide funds from the Consolidated Fund for the expenditure related to the continuation of government services and development activities for a period of three months commencing from March 6, 2020 to June 5, 2020.

He has stated that His Excellency the President has authorized this. The Secretary of the Ministry of Finance, Mr. Artigala, has absorbed the remaining provisions of the 2020 Vote on Account and has given the power to allocate funds to each of the Ministries for the next three months. He has further stated that Article 150 (03) of the Constitution should be cited as the relevant authority for payments, vouchers and other documents during the said period. The following is an excerpt from paragraph 3 of the circular BD/CBP/01/01/04 - 2020.

However, this creates a problem with the circular issued by the Secretary to the Ministry of Finance. That is, it becomes unclear how the expenditure for government services are going to be authorized and managed from the 5th of June 2020 until the next general election. In this context, those who are running the country should resolve this to prevent a crisis and maintain the availability of essential government services.

The Treasury Secretary may ask for the Attorney General's advice in this regard. I do not know what the Attorney General will say. I also do not know whether anything can be done by His Excellency the President once more, after the three months period has lapsed, according to the Constitution. I cannot comment on this as I am an economist and not a legal scholar. Nevertheless, as this is happening for the first time in our lives, Sri Lanka cannot resolve this by looking at how the US and neighboring India have addressed such a crisis.  Furthermore, one should keep in mind that those countries are Federal States and Sri Lanka is a democratic Unitary State.

It should be understood that the cost of a government shutdown is much higher than that of expenses related to reconvening the parliament. In the United States, the closure of the government for 35 days from midnight December 21, 2018 to January 25, 2019 has resulted in a net loss of US $ 3 billion to the economy.  In this background of economic downturn, Sri Lanka is now vulnerable to being downgraded by rating agencies. Pitch has already downgraded Sri Lanka's credit rating to a negative outlook. This will undermine investor confidence in Sri Lanka. Moreover, it will set a bad precedent.

The government should accurately assess the above situation and be flexible on decisions already made by recognizing what is suitable and unsuitable for this type of crisis situation. This must be done with intelligence and with the heart. There is a timely need to understand the pressures faced by the society in light of the new coronavirus and make decisions that will not adversely affect the country's prosperity and the livelihood of the people.

As mentioned above, this is the first time our country is facing a crisis of this proportion and it is quite unique.  As it is a new experience for our country, it is my understanding that there should be no unnecessary risks or experimenting at this time. Statesmen should not experiment with the Constitution at this moment when the entire community is affected by the new Corona virus. I would like to point out that the Government must give immediate attention to the potential crisis and avoid any discontinuity in public services, after the 5th of June. 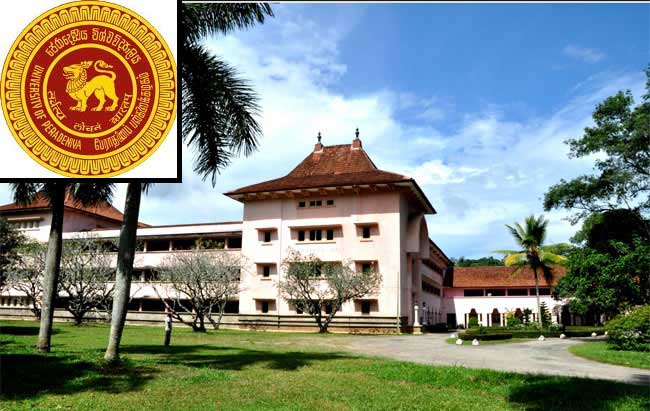 Department of Economics and Statistics,

A Cargo Complex to Maththala